​Hydraulic Fracturing, What is it? 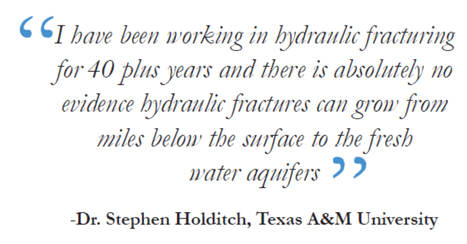 There are many misconceptions about what hydraulic fracturing, or “fracking,” is, but modern hydraulic fracturing is a safe and proven process which has been around since 1947. Since that time, nearly three million frac treatments have taken place. Over 90 percent of all oil and gas wells drilled in the United States are hydraulically fractured each year and have been for decades with no proven record of harm to groundwater.

What is Hydraulic Fracturing? Hydraulic fracturing is the process through which fluid pressure is applied to reservoir rock causing the rock to crack, or fracture.  Some confuse fracking and drilling as being one and the same, when in fact they are two separate processes. Drilling involves the actual drilling of a wellbore to depths well below groundwater and in that process, the wellbore is isolated from the ground around it through multiple layers of steel pipe and concrete.

After drilling is complete, the frac treatment takes place and involves stimulating the rock deep below the surface by placing fluids down the wellbore at a pressure greater than the rock (reservoir) pressure to create a fracture network of small cracks in the rock. The fluid used is comprised mostly of nitrogen and water, a small amount of additives further detailed below and a proppant (typically sand). The sand in the frac treatment keeps the cracks open, which in turn allows methane gas trapped in rock to flow out of the rock and be captured and brought to surface through the wellbore.

Dr. Stephen Holditch, Texas A&M University, noted that concerns expressed by some related to the rock fractures and their ability to crack rock to surface are unfounded.

“I have been working in hydraulic fracturing for 40 plus years and there is absolutely no evidence hydraulic fractures can grow from miles below the surface to the fresh water aquifers,” Holditch said. Based on work done in Virginia fracturing coal ahead of mining for over 30 years to produce the methane and prevent mine explosions, we know from direct observation that hydraulic fractures can’t grow up into fresh water aquifers.
​
When you hear in the news about “fracked gas,” it is important to understand that virtually all gas is “fracked.” The process is what makes it possible to get the gas to surface in usable quantities, so whether it’s the gasoline you use in your vehicle, the natural gas which powers the gas logs in your living room, or allows your stove to heat up, the natural gas that heats your hot water heater, or provides electricity to your home, fracking is ultimately what brought it to you.

“The process is safer and has less environmental impact than driving a car or flying an airplane,” says Greg Kozera, president of Learned Leadership LLC. Kozera, a retired environmental engineer with 40 years of experience in the energy industry holds a Master’s Degree in environmental engineering from Marshall University. “Horizontal drilling and hydraulic fracturing have actually improved the environment in the USA by lowering CO2  and other emissions.”

The additive materials used in a frac treatment are disclosed by companies on the website fracfocus.org. The website was created by the Groundwater Protection Council and the Interstate Oil and Gas Compact Commission. Most horizontal shale wells in Virginia are stimulated (fractured) using only nitrogen. The rock properties of the Lower Huron shale are different from other Appalachian Basin shales and make the use of nitrogen the best method to utilize to capture it.

Vertical wells in Virginia are mainly stimulated using fresh water and nitrogen. Water and nitrogen are combined at different percentages to create a foam based material. Typical foam in Virginia is made up of 70-75 percent nitrogen and 25-30 percent water and other components (described below by volume).
​
Typical water usage in Virginia is approximately 45,000 gallons which is significantly lower than a typical frac uses in other areas. This is significantly less than the water used to water a golf course for one week.